The event is FREE entry, but please book by emailing d_purvis_condottieri@hotmail.com, as spaces are limited.

The film stars Bill Murray and Scarlett Johansson as Bob and Charlotte, two Americans who find themselves in the same hotel in Tokyo, for different reasons (he’s a past-his-prime movie star there to record a TV advert for whiskey, she’s a philosophy graduate accompanying her photographer husband). They’re both feeling adrift in their lives, thinking ‘is this it?’, while time differences and jet lag only exaggerate the surreal atmosphere and their sense of alienation. Unable to sleep, they find common ground in being ‘strangers in a strange land’, decide to make the best of it, and immerse themselves in Tokyo’s unfamiliar nightlife.  A very funny movie, while also being a great depiction of unexpected friendship and mutual support between two very different people. 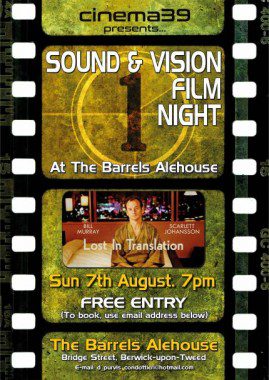 North Star: Berwick-upon-Tweed is the ideal winter weekend away

12 Fun Things to do in Berwick-upon-Tweed